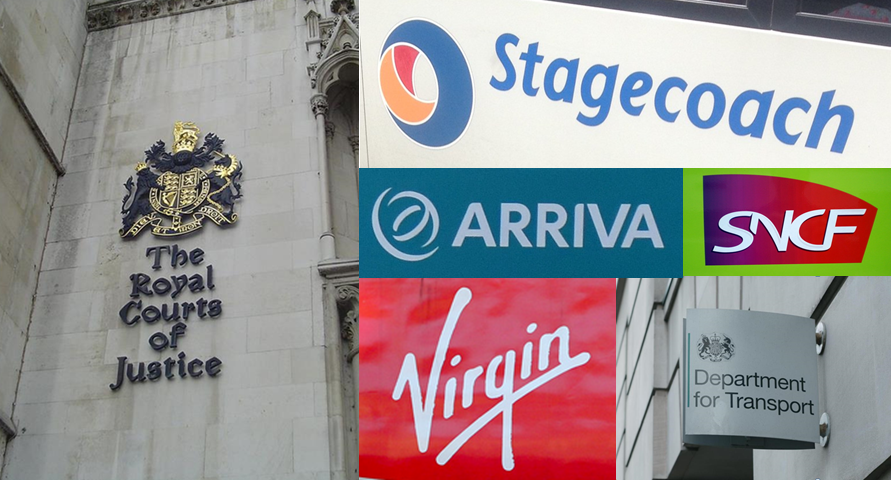 Stagecoach and other operators began their high court challenge last week, claiming that the Department for Transport had mismanaged the bidding process for three different franchises: East Midlands, West Coast Intercity, and Southeastern. They’re seeking a multimillion compensation payout and a judicial review, which could result in the East Midlands and West Coast franchise awards being declared invalid.

The cause of the legal dispute is a change made by the DfT to pension liability, meaning that the government would no longer be the final guarantor of pension shortfalls. Last year, the Rail Delivery Group said the Pension Regulator had demanded “immediate and significant contributions worth £2.6bn or more.” The Pension Regulator has put the total railway pensions deficit at £7.5 billion, but recent analysis reported in the FT suggests it could be as high as £11 billion.

The court case is shrouded in commercial confidentiality. Yet the political fallout could be unprecedented, with the possibility of the West Coast (Avanti) and East Midlands (EMR) franchises being revoked; and the strong likelihood of a national rail strike if workers’ pensions are affected. Most worryingly of all, there are now rumours circulating in the rail and financial press that the Williams Rail Review will not be released, with its recommendations going straight into a government White Paper.

We’re forced to ask – can there be any credibility whatsoever in a White Paper that is being concocted under such legal pressures and perverse incentives? The rail franchising model is clearly in its death throes and we need to be more on guard than ever against the influence these toxic contractual relationships might be having in the writing of new legislation.

1. Arriva settled their claim on the eve of the court case. The amount of compensation paid to the company remains confidential.

On the first day of the court case, it was announced that Arriva had settled a related claim regarding their disqualification from the East Midlands bid for refusing to take on pension liability. The claim included the fact that DfT civil servants sent details of Stagecoach’s bid to the other competitor Abellio, which eventually won the franchise as the last bidder standing. Arriva refused comment to the press, but told the court that it had agreed to a compensation settlement “on terms confidential to both parties.” Arriva was previously reported to be claiming £200 million for its exclusion from the East Midlands franchise bid.

2. Stagecoach lawyers said the Railway Pensions Scheme was a ‘basket case’ and that rail franchising is ‘in crisis’ with the DfT accepting ‘unbelievable’ bids.

Jason Coppel QC, acting for the train operators, said that bidders had been expected to take “disproportionate” risks and that the successful bidders did not say “how they would manage and pay for” the additional pension liability. He argued that the crisis in rail franchising is “because of risks which the department has required [franchises] to assume or because of over-optimistic bids which the department should not have accepted.” In regard to the unresolved issue of pension liability, he called the Railway Pensions Scheme a “basket case” and said it would require extra funding ranging from “bad to off the scale”.

3. There were new, shocking revelations about civil service conduct in the era of Chris Grayling.

Lawyers argued that the DfT was responsible for a “long series of missteps and mistakes” when it was run by Chris Grayling between July 2016 – July 2019. The most shocking revelation of all came at the beginning of the week, when Jason Coppel QC revealed to the court that civil servants had a solution to the pensions dispute that had been approved by the Treasury – but did not share this with Chris Grayling. Civil servants are due to be cross-examined in the trial, including the highest-paid civil servant: Peter Wilkinson, MD of Passenger Services at the DfT.

4. The lack of transparency and accountability was cited as a cause of the rail franchising crisis.

Jason Coppel QC went on to criticise the DfT over the amount of evidence that has been declared a commercial secret, accusing them of hiding information that was merely “embarrassing”, rather than confidential. He said that DfT culture was “highly resistant to openness and accountability” and that the combination of the broken franchising system, railway pension deficit and culture of secrecy in the DfT had been an “accident waiting to happen”.