Today’s events at Gatwick were an entirely predictable outcome of a company and management contract that have never been fit for purpose. Govia Thameslink Railway is clearly to blame for the situation; given that engineering works were scheduled six months in advance, a heatwave was forecast, and the launch of the Brighton Fringe and Brighton Festival happens at the same time every year. There can be no excuses for today’s events and we call on journalists, MPs and the Office of Rail and Road to hold GTR properly to account.

What makes this situation even more appalling is the fact that it happened just two months after the Redhill rail replacement bus disaster. At the time, we were not satisfied with the excuses given by GTR senior management and so revealed the facts behind the story, in response to Angie Doll’s explanation to the BBC, and just as Charles Horton gave his own version to the Public Accounts Select Committee.

The Redhill experience showed us that if we don’t dig up and reveal the facts behind these incidents, nobody will. We have been attempting this voluntarily for two years now, and it is frankly now beyond embarrassing that a small group of commuters can provide the transparency that GTR and the Department for Transport will not. We’re not happy with this state of affairs and frankly, we want our lives back! We will now be writing to the ORR and urging them to step in and ‘show their teeth’.

Here’s the full story of what happened today. All internal memos are presented in the public interest and journalists requiring any further information are welcome to contact us at contact@abcommuters.com. 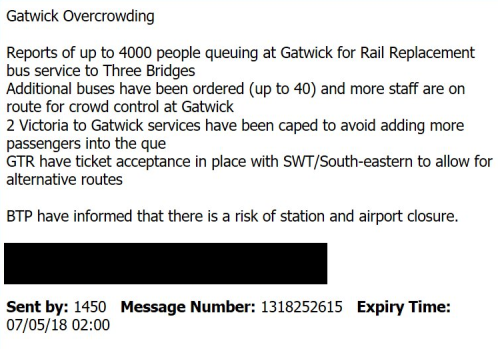 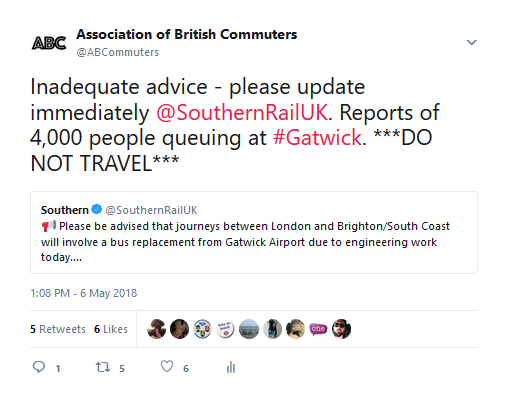 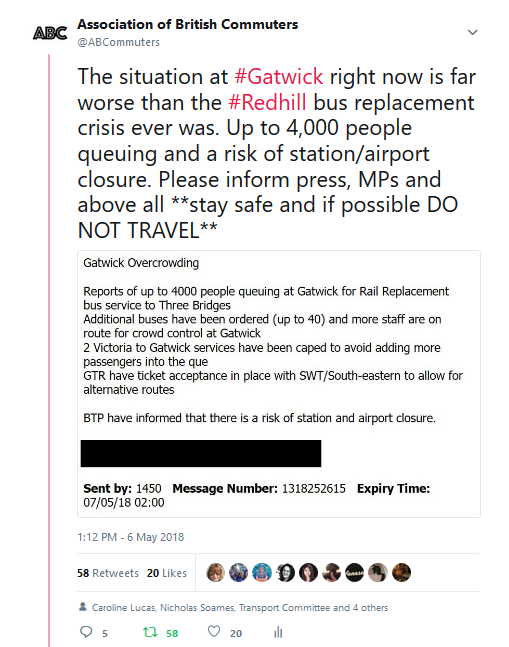 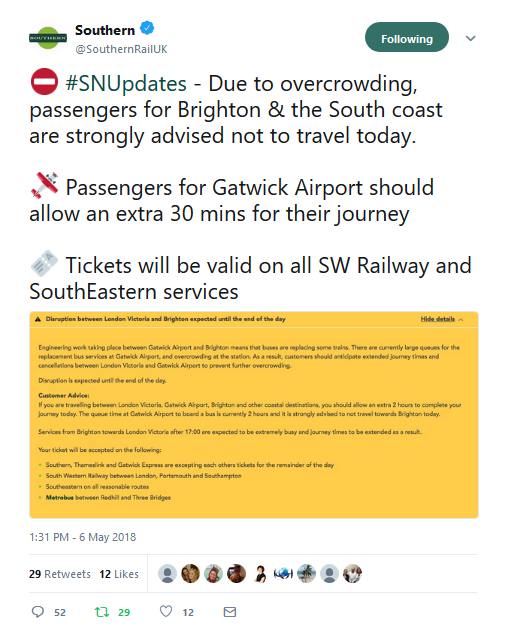 Our latest update (as of 7pm on Sunday 6th May) is that four extra trains have been laid on from Brighton to Victoria this evening, and four extra trains from Victoria to Brighton. This was achieved by the rapid lifting of engineering works between Horsham and Dorking. Now, if this could be so quickly achieved by Network Rail in light of the emergency caused by GTR’s failure of planning, then this begs a serious question: should these Horsham to Dorking works have taken priority in the first place on a day that would completely predictably be so busy?

This question is particularly important when one considers that the Department for Transport claims to be improving co-operation between GTR and Network Rail. The rapid lifting of engineering works at the last minute suggest extremely inadequate communication/contingency planning ahead of today’s emergency. We note the relevant conclusion of the Public Accounts Committee report last month:

At the time of the last ‘rail replacement bus crisis’ at Redhill in February, we called for the Office of Rail and Road to intervene in GTR. We now repeat that call and ask the regulator to step immediately; an action that is seriously overdue.

We are extremely concerned about what kind of management practices passengers will fall victim to in the upcoming nine-day blockades of the Brighton line in autumn 2018 and new year 2019. It is essential that all future rail/bus replacement plans are independently audited and checked for their robustness and realistic understanding of passenger numbers.

It is vital that senior GTR management are asked to take a proactive role in meeting passengers’ consumer rights regarding ‘consequential losses’ and delay repay for their experiences today. Any attempt by GTR to assume no delay over and above the times calculated by Journey Planner (ie assuming people have walked onto buses with no queues) will be completely unacceptable, and ABC will follow this up even if our MPs and the Office of Rail and Road do not.

We would call on members of the press to ask GTR managers explicitly whether Delay Repay will take into account the extended journey times in this situation; so that a clear commitment to accurate Delay Repay will be on record if customers should experience problems later.

Will there be another ‘rail meltdown’ tomorrow?

We are concerned that there will be further trouble tonight at Three Bridges, and other locations where people are attempting to return to London from the coast. And that’s not to mention Redhill, where passengers had their service reduced from 4 trains per hour to just 1 train per hour today; leaving many people unable to board.

Tomorrow is likely to be a difficult day to travel – even in a ‘best case scenario’ – so we strongly advise passengers to avoid using Southern Rail unless absolutely necessary. If you do end up caught in a similar situation, please stay safe/hydrated and remember that this is not the fault of frontline staff. The lack of foresight and planning from GTR senior management is to blame – whether this be through accidental incompetence or a deliberate ‘heads in the sand’ mentality.

Whoever said “Lessons will be learnt” after the Redhill debacle needs to be shown the door – without a parting bonus.