Since December 2018, we have been investigating the remit of the Williams Rail Review and asking that it stays true to the democratic principles Chris Grayling described in Parliament last October.

The Secretary of State for Transport has said that he recognises the need for a ‘rail revolution’ and that ‘no stone will be left unturned’ in efforts to find a more ‘joined up system’. However, it has also been widely reported that he will not consider renationalisation. Keith Williams, chair of the review, meanwhile told the BBC that ‘all options are on the table’. For more about the ongoing controversy, click here.

Our questions to the Department for Transport

Ten days ago, we asked the DfT to clarify whether the remit of the Williams Review is based on or limited by the government’s pre-existing vision of a franchising strategy. We asked if Keith Williams has complete freedom to evaluate public ownership and other non profit solutions for the railways. We specifically asked whether he is free to allocate resources as he wishes – and if so how much resource he will be allocating to these discussions.

Our questions were declined by the DfT and we were told to expect a response from the Rail Review team. However, this response has now been delayed ten days – which were also the final ten days of public submissions to the consultation as advertised by rail industry and Network Rail body the Rail Delivery Group. 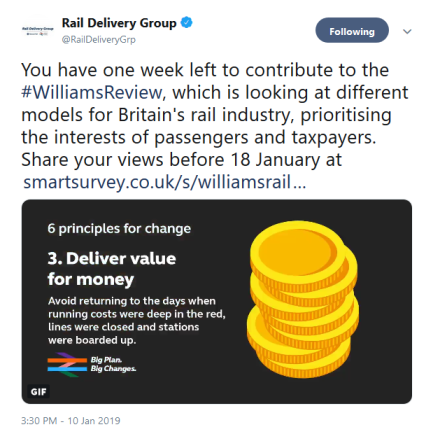 The closing date for submissions from the public was updated in mid December on the DfT website to the end of May, clarifying that the deadline of 18th January was in fact just a ‘listening’ phase. So, if the Williams Rail Review is indeed going to consider public ownership then this fact has not been advertised or made open in any way to the public. This is a cause for concern and a question that must be asked in the clear public interest.

The Rail Delivery Group has commented

The Rail Delivery Group responded to our questions about this issue and redirected us to the Williams Review team, from whom we still await comment. In response to our question about whether Keith Williams will consider public ownership in his review the RDG added: “The Williams Review team would be best placed to answer this, as it’s about their plans. Last summer, we said that all options should be considered.”

We will publish in full any response we receive from the Williams Rail Review when we receive it, and hope to also let you know of any opportunities to speak with him directly. Those passengers and commuter groups who have suffered the most through last year’s crisis should have a seat not only ‘at the table’ – but at the head of the table.

Let’s make 2019 the year of #RailRevolution

We will be submitting an ABC report to the Williams Rail Review, and keeping our own consultation open until the beginning of May, in time for the actual consultation closing date of end of May. Our contribution will be limited to issues around transparency, democracy, passenger rights and participation and will not address issues of transport economics directly. If you wish to contribute your insights or experiences please write to us at contact@abcommuters.com with the subject line: Transparency Report.

The ABC Transparency Report will summarise our investigations into Govia Thameslink Railway, the Department for Transport and the issues of driver only operated trains and disability access. Please note, this project will be independently funded through our GTR Crowdjustice page. If you would like to donate much needed funds to this investigation, please contribute here.

We Own It, Care 2 and Bring Back British Rail will be delivering a petition to the DfT tomorrow morning at 10 a.m. and members of the ABC team will be there to report back.

We are hoping to get the chance to meet Keith Williams and speak with him directly. And we’ll be sure to let him know that there are many of us who want to get involved with a democratic public dialogue that goes beyond political and partisan concerns. At this time of historic political uncertainty, it does not make sense to waste more taxpayers’ money on a review that is limited to just one party’s vision for public transport. The only democratic way forward is to invite public participation so that the UK can finally have a transparent conversation about rail in a totally independent forum.

The petition for public ownership has 120,000 signatures and is a sure reflection of the fact that over 60% of the British public want to see a form of public ownership for the railways. UK rail franchising is broken and it’s time to talk about what a truly progressive twenty first century transport system should look like.

To respond to the Williams Rail Review, click here.

One thought on “Does the Williams Rail Review really intend to engage with passengers?”