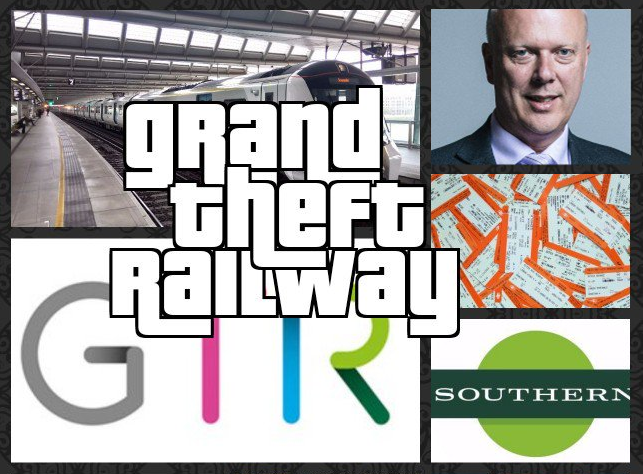 A First Class controversy involving Mark Boon (GTR’s Head of Network Operations) went viral on Wednesday and has since found its way into every national newspaper.

As ever, we encourage people not to get caught up in the personal stuff but to actively call the media’s attention to the far bigger scandal underneath – GTR’s management contract with the DfT. The reason that Mark Boon’s attitude hit home for so many is because its the perfect metaphor for a company that functions as a proxy to the Department, and with complete impunity:

So, if we’re talking farce (while also trying to make a serious political point) there is nowhere better to go next than the story behind the First Class declassification last month….

The #RailPlan2020 timetable collapsed on May 20th, and passengers on the GTR network have suffered a ‘turn up and hope’ timetable ever since. Conditions have been overcrowded, unpredictable, dangerous and hot – the effect this has had on those with disabilities and health conditions cannot be overstated.

And yet, despite this unprecedented rail crisis, and the clear health, safety and equality issues for passengers, it took over five weeks for First Class declassification to be agreed.

The news was announced by Alistair Burt MP at 6:30 pm on the 28th June:

Unfortunately for Alistair, his moment of triumphant announcement was overshadowed by the fact that this came as a complete surprise to GTR’s social media team. Here they are on the first day of declassification, still unaware: 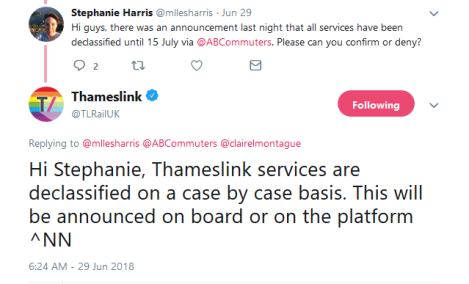 And here’s GTR’s social media report from the morning of the 29th, the day that First Class declassification should have begun:

Who makes the call on First Class?

As with most things GTR, this was a DfT decision – note this extract from Jo Johnson’s announcement letter on the 28th June, linked below:

Questions for the Department for Transport: